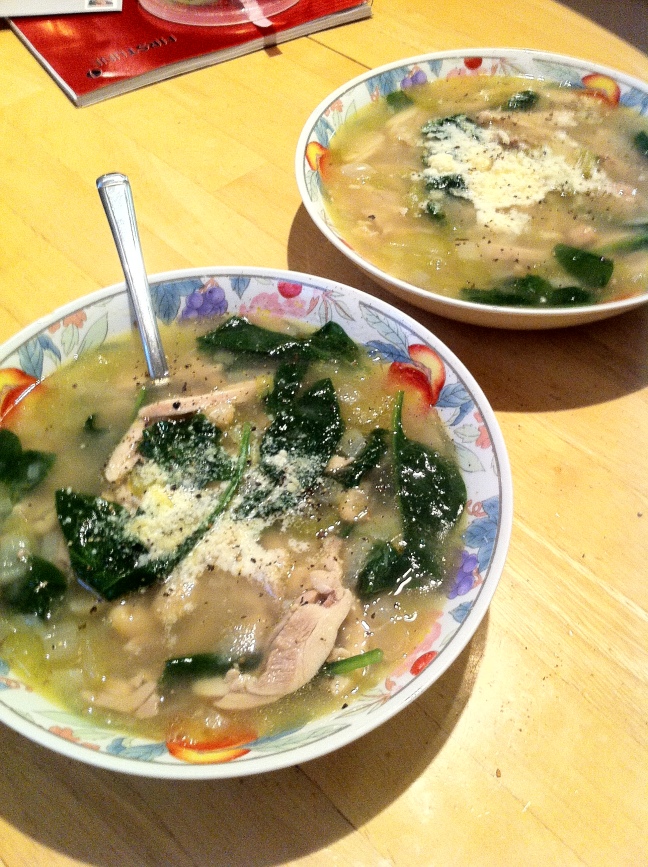 With temperatures on a steady decline, I’m busting out my stockpots once again. Monday marked the beginning of autumn and soup season has officially been declared.

This week features a low carb chicken soup recipe. Drastic temperature changes unfailingly give me the sniffles, so I needed the comfort of a chicken soup but without the starchy carbs. Nothing stifles a cold like an entire bulb of garlic and some chicken soup.

One thing you probably don’t know about me is that I have been living with a monster for the last two years. The dreaded potato chip monster. I think he sometimes goes by the name “Douglas”. It had gotten to the point where my life had become a bottomless bag of chips. I’m not the type of person that can be within 20 metres of an open bag of chips without mindlessly shoveling giant handfuls into my mouth after boldly declaring “NO CHIPS FOR ME, THANKS”, so it became an internal struggle every time Doug brought a bag home.

Just a couple of weeks ago I came home to an open bag Doug had left sitting on the table before going to work, staring me in the eyes, daring me to resist. I spiraled into a blind rage which caused me to repeatedly yell the word “NO!” out loud. I snatched up the bag, carried it arm’s length away from my body, charged into the kitchen and tossed it on top of the fridge and out of my sight.

The time had come to put my foot down about chips. We’re through. If chips and I are going to be under the same roof, there has got to be a change. No more dill pickle, no more salt and vinegar, no more lightly salted Lay’s, no more jalapeno cheddar Cheetos. Douglas is free to bring almost any other flavour into our home without me having an anxiety attack.

I am hoping that cutting out all high GI carbs for the time being will help me kick this habit and lose some lbs now that my thyroid levels are medicated and stable. Diets that work well for others usually do not work for me. In fact, last year around the same time, cutting out carbs for two months did absolutely nothing for me. However, this is the first time changing my eating habits since medicated earlier in the year. So, let the great experiment begin.

Season the chicken with salt and pepper, and roast with a whole bulb of garlic wrapped in tin foil in oven at 350 degrees for 30 minutes. Set aside and let the meat rest 10 minutes before cutting into bite-sized chunks. Cut the top off the garlic bulb, squeeze out the garlic and mash into a paste.

Heat oil in a large soup pot over medium. Add the celery, onions, and sprinkle with a bit of salt and pepper. Cook for 5-10 minutes or until softened and stir in the thyme and bay leaves. Cook for another 5 minutes or until fragrant and add the chicken stock, beans, garlic paste, chicken and deglaze the pot. Go ahead and grind some more fresh black pepper in there. Liberally! 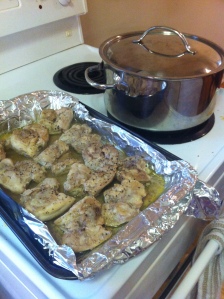 Bring up to a boil and bring the heat back down to simmer, covered, for 20-30 minutes. Stir in the spinach until it wilts and serve with a sprinkle of Parmesan cheese.